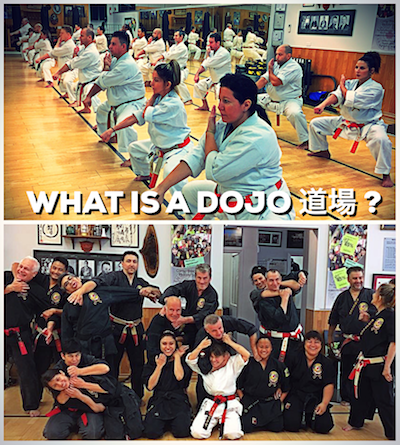 Like so much that is memorized, unquestioned and repeated, when asked what is a dojo, most students reflexively respond, it is the place (jo) of the way (do).

Rather than accepting this standard and perhaps narrow definition, we should consider how the term dojo was described by great martial masters.   According to the oft-quoted Father of Modern Karate-Do, Funakoshi Gichin, “You can practice karate twenty-four hours a day, and everywhere is a dojo.”  Nagamine Shoshin sensei, an individual who left a lasting impression on me, defined it as “…the place where courage is fostered and superior human nature is bred through the ecstasy of sweating in hard work. It is the sacred place where the human spirit is polished.”

Recently I shared a fun clip featuring one of our senior instructors eating his birthday cake during a surprise party organized by appreciative students. After a long day of classes, there was laughter, fellowship, and yes, cake.  Hundreds reacted positively to this post and drew parallels to year-end/new year parties, graduations, and other celebrations hosted in dojo around the world. However, a few people were upset that the sanctity of the school had somehow been marred.

This mixed reaction prompted me to think what exactly is a dojo, and we begin by examining its historical origins.

Early martial arts students didn’t train in a building or dedicated space, at least not by today’s standards, and practiced outdoors.  Gradually, formalized dojo appeared, and as any Japanese art with the suffix “do” (from the Chinese tao or dao, meaning “way” or “path”) would be practiced in these schools, they were often situated next to temples.

The decor, which resembled a zendo or Zen meditation hall, was simple so as not to distract the mind, and while many modern dojo still respect this minimalist sensibility, others are high-tech fitness studios.

Like training methods, equipment and curricula, the style of brick-and-mortar dojo must evolve to service 21st century budoka.  The need to progress and remain relevant was something our martial ancestors recognized decades ago.  For example, Nagamine Shoshin sensei introduced rope-skipping in the mid-1950s.

So what is a dojo?

It is the syllabus/system, as well as physical space:  floors, walls, implements, kamisa, scrolls, and sometimes, mirrors and windows.  It is the blood, sweat, tears, laughter and kiai of each member, and the tragedies and triumphs of everyone who crosses its threshold.  It is a community – a family – where together, we strive for physical, mental, social, emotional and spiritual growth, as we create our personal definition of “dojo”.

…and occasionally, it’s a place where happy students celebrate with birthday cake.