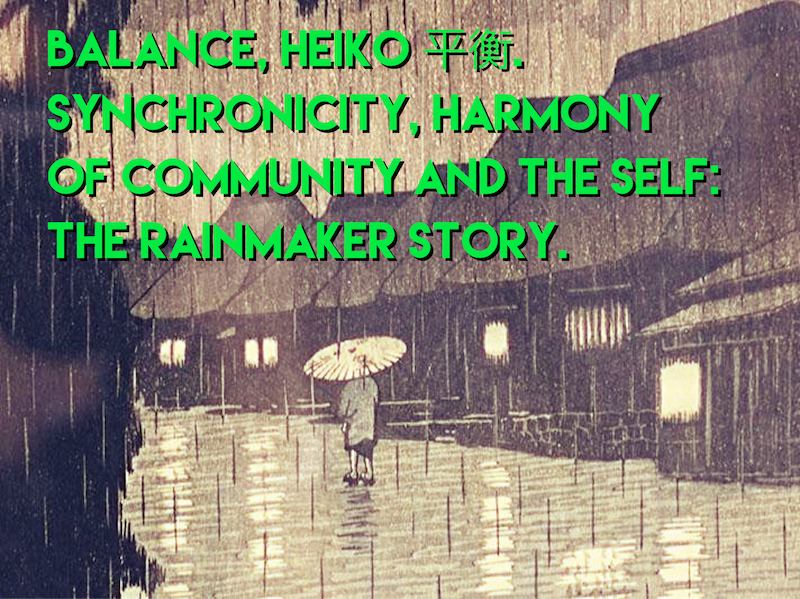 There was a great drought in a province of China. For months there had not been a drop of rain and the situation became catastrophic, famine and starvation loomed large.

Finally the provincial governor stated, ‘We will fetch the rain-maker.’ And from another province a dried up old man appeared. The only thing he asked for was a quiet little house somewhere, and there he locked himself in for three days.
On the fourth day the clouds gathered and there was a great snow-storm at the time of the year when no snow was expected, an unusual amount, and the town was so full of rumors that an official party went to question The wonderful rain-maker was asked ‘How did you do this?’

And the simple aged man said: ‘I did not make the snow; I am not responsible.’
‘But what have you done these three days?’
‘Oh, I can explain that. I come from another country where things are in order. We live in harmony, so there are not many problems to deal with. Here things are out of order; they are not as they should be by the ordinance of heaven. Therefore the whole country is not in Tao, and I also am not in the natural order of things because I am in a disordered country.
So I had to wait three days until I was back in Tao and then naturally the rain came.’”

Finding Balance or Synchronicity comes from giving time and energy to the things that build you up and give you life, happiness, success, and also empowers your community, dojo family, and the world at large.