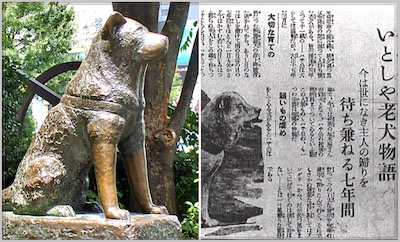 All traditional martial art systems are bound to concepts of Giri 義理(obligation, duty, justice) and On 恩 (a debt of gratitude for kindness given). True loyalty is born of these concepts. Maybe our canine friends understand it best.

Noted professor of agriculture science at Tokyo University, Eizaburo Ueno for some time wanted a pure bred Japanese Akita dog. He had looked for the perfect Akita puppy for a long time, until one of this students encouraged him to adopt Hachiko, from the Odate city in Akita prefecture. Hachiko, or Hachi which became his nickname, and his new owner soon became best friends, and Eizaburo loved his dog above all and treated him as his son. The two of them were inseparable. As Hachiko grew older, he started to see his owner off to work in the morning at the Shibuya Train Station, in central Tokyo and went to pick him up at the station in the afternoon when he returned from work.

On May 21, 1925, only two years after Hachiko was born, Hachiko was as usually sitting by the exit at Shibuya train station waiting for his dear Eizaburo. But his owner never showed up… It turned out that Eizaburo had suffered from a cerebral hemorrhage and died suddenly and unexpectedly while at work. Hachiko moved in with a former gardener of the Ueno family, but throughout the rest of his ten-year long life he kept going to the Shibuya Train Station every morning and afternoon precisely when the train was due to enter the station, waiting in vain for the return of his beloved owner which sadly never came back.

A major Japanese newspaper reporter picked up the story of Hachiko in 1932 and published it, which led to Hachiko becoming a celebrity all over Japan. People started calling him “Chuken-Hachiko”, which means “Hachiko – the faithful dog”. The story of the dog that never gave up gained a lot of attention also in national media, inspiring many people from all over the world to visit the statue of Hachiko at Shibuya Train Station and leave him treats.