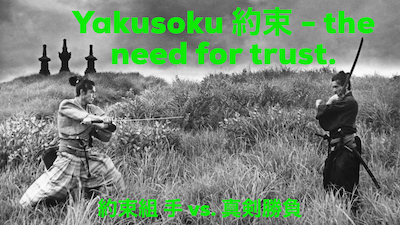 Most Japanese to English dictionaries list Yakusoku as – Noun. やくそく 約束: a promise, an arrangement. A simple word that has extensive and profound meaning in methodologies of Budo and Bujutsu. A physical, practical term as well as a social contract.

In karate, yakusoku kumite are prearranged exchange drills between the defender Tori (the taker or doer) and Uke  (the receiver). An obligatory mode of practice for the novice karateka where the rules of respect and dojo decorum manage the performance and the outcome. It’s a predestined relationship.

This method of ‘person to person’ exercise is practiced widely in most forms of martial arts. These defined role engagements are popular in traditional grappling systems like, Jiujitsu, Aikijutsu, Judo and especially Aikido. Most weapon arts where possibility of injury is greater, focus a great deal on ‘feeding drills’. In Ryukyu Kobudo and Filipino Escrima alike, these constitute the bulk of regular practice.

The ‘promise’ method of dual opponent training is a great way to develop understanding of distance, angles, and receiving some force. As the outcome is predetermined, all strikes, seizes or weapon blows are controlled. While novice students gain confidence, a more mature practitioner might become over confident.

One thing we should remember. You cannot control an attacker who is fully set to injure you. There are no wrong attacks, only the instant adaptability. In Bujutsu we are fond of saying, nani ga kuru kamo shirenai, or come what may.

The middle path may be found using “semi promise” hard contact drills. These could be done with some protective equipment. Where the attacker has full autonomy to change angle and strength of attack. There might some bruising, but no permanent injury.  Let’s say it’s a ‘knife drill’ where the attacker can strike and grapple at will. The drill becomes more about controlling distance, seizing, and unbalancing, rather than just matching the angles of a cooperative partner.

The reality is that actual violent attacks are brutal and deadly. Even with highly developed skills, the likelihood of being injured is very high. Spontaneous ‘hard’ training will increase the chance of survival in vicious assaults. So without the ‘promise’ of the outcome, we embark on the journey of discovering who and what we are. Warts and all.