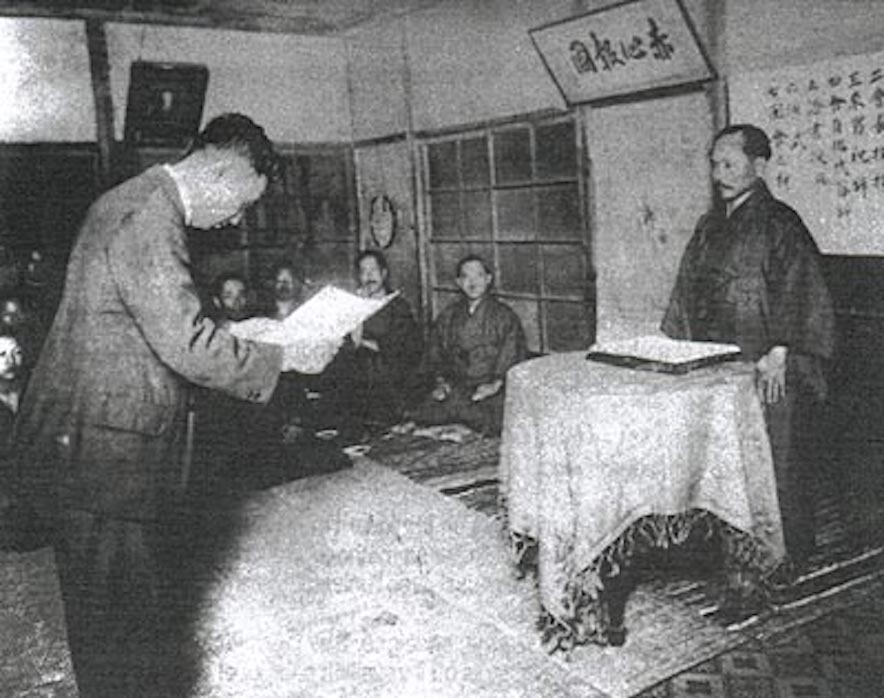 There is a dual ranking system in martial arts: Koryu (traditional, battlefield-ready methods with kepan or blood-oath); and Gendai Budo, sometimes called Shin Budo (skills of personal development acquired through martial practice).  While the latter was tied to a membership price or sizeable donation, it shouldn’t be misconstrued as teachers compromising their standards, but instead, a means to survive and protect their traditions in new and uncertain times.

Twilight of the Samurai:

With the stroke of a pen, the new emperor (Meiji, “Enlightened Rule”), a quiet, reserved sixteen year-old, ended the feudal system in Japan. The new charter, or Five Articles, signaled a fresh direction for the country, particularly Articles 2 and 3 which stated, respectively:  all classes, high and low, shall unite, and, the common people shall be allowed to pursue their own calling so that there is no discontent.

Suddenly, wealth and leisure time became the criteria for martial arts study, replacing nobility or position.  Prior to the Meiji Ishin (Restoration) of 1868, armed and unarmed combat practice was reserved for individuals of samurai class, and as many regionally based ryu were affiliated with a particular daimyo (lord), training was a factor in social advancement. Teachers propagated their system while receiving a stipend and martial arts instruction was a family affair, passed from father to son. It should be noted that individuals who excelled in the dojo environment did not necessarily stand out on the battlefield, where character and experience trumped mere technical skill.  The Koryu ranking system was reserved for students who possessed high character, loyalty, skill and service to teacher/school. Graduates were entrusted with the ryu teachings (curriculum) and presented with a Mokuroku or Makimono (scroll/diploma).

Mokuroku or Makimono is a long scroll detailing the hidden teachings of a particular system, including, but not limited to: translation and philosophical meaning of the ryu name; chronology of its founders and contributors; glossary or catalogue of techniques, as well as proprietary/secret skills; pedagogy or instructional methods; and, practical and spiritual advice.  The scroll was signed, frequently in a stylized Samurai script, and sealed with an Inkan, or Hanko. Later, Mokuroku were trimmed, thereby providing the format for Mekyo (modern certificates).  After interaction with the Satsuma, Mokuroku appeared in Okinawa, i.e. Tode Jukun (10 Precepts of Itosu).

The modern ranking system (First to Tenth Dan) was created by Kano Jigoro, founder of modern Judo, and stands as only one of this martial visionary’s achievements. Kano sensei was an educator and politician, and most importantly, martial artist.  He held several influential posts including Director of Primary Education (1898–1901) and President of Tokyo Higher Normal School (1901-1920).  In the early twentieth century, he spearheaded the inclusion of judo and kendo into the Japanese public school curriculum, and in 1912, established the Japan Amateur Athletic Association (Dai Nippon Taiiku Kyokai), charged with supervising amateur sport throughout the country. That same year, Kano sensei travelled to Stockholm as Japan’s official representative and member of the Olympic Advisory Committee, and played an instrumental role in the organization of the Far Asia All Athletic Championships. A friend and supporter of Funakoshi, Kano held deep respect for Okinawan Karate, and shared his colleague’s commitment to the democratization of budo.  He devoted his life to making martial arts study accessible to all regardless of gender, age, race and religious affiliation.

Dan (段 ) is literally translated as “step” (as in climbing a staircase), and the title was originally used in Go, a popular board game, and Ikebana, flower-arranging.  During the Edo period, the rank structure and title were employed in dojo as a means of attracting the nouveau riche, members of the wealthy merchant class, who placed greater value on personal development than personal defense.

Advanced Ranking – Judan, Age Requirement and Red Belt:
Why was 60 the minimum age for red belt or Judan*? In Okinawa and mainland Japan, individuals of advanced age are revered and respected, and in accordance with Gaju (commemoration of long life), the first milestone is Kanreki (60 years). Among Buddhists, this marks the completion of one life cycle, and is celebrated with traditional gifts – a half-coat and floor cushion – both in the color red which is believed to have protective properties. This custom extends to dojo, where 10th dan wear red belts, symbolically protecting teachers and students from ‘evil’ thoughts and actions. *This age requirement has been modified, with the sons of deceased teachers receiving their Judan in their fifties.