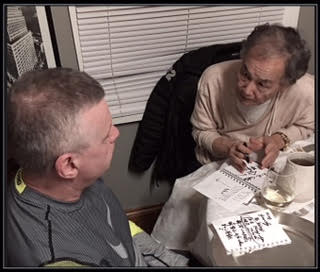 The budo dojo (place of learning martial arts) is a microcosm of Japanese historical and social traditions including the senpai-kohai system.

Most westerners try to equate this in the terms of the master-protégé or master-apprentice relationship. This is incorrect. Although there is no precise English translation, senpai (先輩) means an upper-classmate, senior practitioner, or older person with whom you interact, and kohai (後輩) refers to a junior, lower ranked or less experienced individual.

Seniority and tenure trump age and ability in determining the senpai’s standing within a dojo, martial system, group or organization. Advanced students (higher kyu or dan) are paired with newer members, and the senpai is relied upon to instruct kohai in the finer points of practice while the sensei oversees the entire group.  Some senpai take an active, hands-on approach and others opt for a more relaxed attitude when tutoring lower-ranked students. Either way, senpai coaching is a powerful factor that influences budo progress.

Beyond the dojo, a manager, supervisor or even a retired senior of a company could be regarded as senpai and this non-martial association better illustrates the importance of this symbiotic relationship:  a senpai’s advancement is inextricably linked to his or her kohai’s abilities.

Just as distinct rules govern the senpai’s role, strict guidelines define the responsibility of kohai, who are often charged with cleaning the dojo and maintaining equipment. This “grunt work” is viewed as a means of testing the resolve of the kohai. Essentially, kohai are expected to respect, obey and assist senpai.

Bottom-line: On the surface, the senpai-kohai communion is simple: individuals with more experience guide those with less.  The reality is that this is an intricate alliance, particularly in the 21st century where youth is prized, experience may not translate to wisdom and suppressing the ego is done with reluctance.  Additionally, one can be both senpai and kohai (i.e.  brown belts are senior to white belts and junior to black belts). Generally, this reciprocal connection continues for as long as the two maintain contact and is independent of any change in status – even rank advancement.  Once established, seniority remains fixed, even as the pay it forward cycle of giri continues.

Another consideration: aren’t we all kohai to the organization we serve?

The senpai-kohai relationship is undeniably a vital, multifaceted component of martial arts training, particularly in a traditional dojo, and while both have responsibilities they also reap immeasurable reward as a result of this partnership.  Senpai have the privilege of sharing their experience invigorated by the energy and advancement of their charge. Kohai are nurtured as they share their interest, enthusiasm and vitality with a mentor.

It is through this fellowship that the ideals of the do (art) and ryu (system) are preserved, foundation and spirit of the dojo are fortified, and mutual growth and stability are assured.