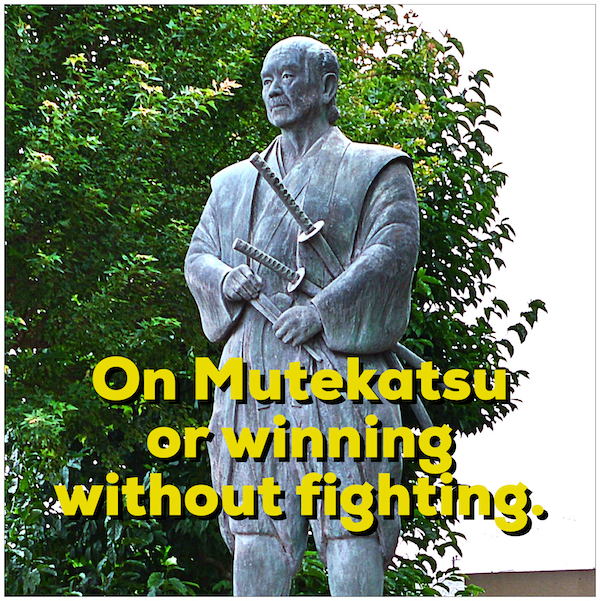 Legend* tells us that Kensei 剣聖 or sword saint (honorary title given to a warrior of legendary skill in swordsmanship) Tsukahara Bokuden (1489-1571) was crossing Lake Biwa in a small boat (maruko-bune 丸子船) crowded with fellow passengers.

Bokuden a swordsman of incredible renown, always kept to himself. Yet his reputation of being a founder of Kashima Shintō-ryū (鹿島新当流) and personal teacher to Shogun Ashikaga Yoshiteru was a blessing and curse that followed him everywhere he went.

A fellow traveler a noisy and bellicose samurai was boasting of his unmatchable sword skill with the sword. His loud manner caught the attention and ire of the passengers. Only Bokuden, pretending to be asleep, was ignoring him. The braggart, continued on, boasting of his deadly skills. He finally started taping Bokuden on his shoulder, while rudely inquiring, what ryu of swordsmanship followed. Bokuden replied: “The mutekatsu ryu”. What’s that?”, asked the swordsman. Thereupon Bokuden explained that this style of swordsmanship was the highest form of skill possible with the sword, for it relied on the use of no hands 無手.

The answer made the swordsman angry. He shouted: “You mean that you can defeat me without using your hands?” Bokuden replied quietly in the affirmative. “But why then do you carry two swords?”, asked the braggart swordsman, growing still angrier.”I use my swords only to vanquish my own selfish desires”, answered Bokuden. The swordsman, now fully enraged, ordered the oarsman to head for the nearest land, where he might engage Bokuden to settle the issue. But Bokuden voiced concern for the lives of innocent people who might happen to wander into the combat and suggested, instead, that they go to a small island nearby. The swordsman agreed. As the small boat was beached on the island the impatient swordsman leaped ashore, threw off his top coat, and stood ready for combat. Bokuden rose slowly from his seat, removed his jacket, and to all eyes appeared about to follow his challenger ashore. To the great surprise of all, especially the boastful swordsman on the beach, Bokuden than quickly picked up an oar and shoved the boat out into the lake. The current quickly carried him away. As the stranded swordsman bellowed with rage, Bokuden called out to him in a calm but clear voice: “This is how the mutekatsu ryu defeats his enemy”.

This famous scene was repeated in Bruce Lee’s Enter the Dragon.  Lee a student of Asian history, gleamed much of ‘his’ philosophy from the martial heroes and zen thinkers of yesteryear.

*The Kōyō Gunkan (甲陽軍鑑) is a record of the military exploits of the Takeda family.