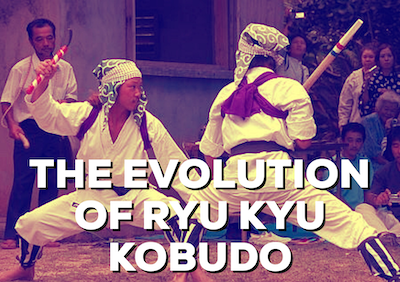 To understand the development of Okinawan Kobudo and specifically the important role played by the bo, we must examine historical facts and popular folklore.

The bo is an ancient implement employed in early Shamanistic rituals. At the religion’s core is the sanctity of seji or a deep spiritual power. Devotees believe that the seji is the source of power for the shaman, warrior or ruler.

Shamanistic ceremonies included sacred omoro songs and kami dances that were often performed with a bo. Special bo dances were an integral component of festivals celebrating terukawa (sun), terushino (moon) and teda (sunshine). These elaborate productions also marked the harvest, commemorated special historical events and honoured ancestors. Colourfully costumed village strongmen carrying bo would perform martial-like routines to the pulsating rhythm of cymbals and drums. In my view, the similarity of these routines to weapons kata is unmistakable, and these dances were likely the forerunners of modern kobudo forms.

Since time immemorial, land disputes and personal disagreements between aji, chieftain leaders of Uchinanchu (native population), were resolved by means of armed and unarmed combat. The size of these groups rather than their fighting skill is often what determined the outcome of these battles. By the dawn of the fourteenth century after hundreds of years of civil conflict in the Ryukyus, three centres of commerce and political power had emerged: Nanzan (south), Chuzan (middle) and Hokuzan (north). In 1429, King Sho Hashi unified these states and established Shuri as their capital. Additionally, he governed with a ruling system designed to control the aji.

With the painful memories of armed conflicts indelibly etched into the hearts and minds of his people, Sho Hashi’s descendant, King Sho Shin (1477-1529), issued a royal decree banning private ownership of swords and other instruments of war. Eku (oar), kama (sickle), tonfa (handle) and nunchaku (flail) were ordinary tools utilised by farmers and fisherman and as such, were not confiscated. It should be noted that iron was a rare and valued commodity and its use was strictly regulated. Therefore, most tools including the bo were made of wood.

King Sho Shin also ordered all lords to abandon their fortresses and commanded them to reside in the castle district of Shuri. This aggressive attempt at unification resulted in an undercurrent of civil unrest and advanced the development of personal defence methodologies, incorporating the use of traditional tools and common implements as weapons.

Nearly four hundred years later during a discussion that allegedly took place during the early nineteenth century with the newly deposed Emperor Napoleon Bonaparte, the great Asian explorer Basil Chamberlain Hall described the Ryukyus as a “place with no visible means of defence.” This erroneous conclusion was formulated by Hall and his crew after they saw no evidence of firearms or antiquated weaponry, e.g. swords, spears or bows. Napoleon’s reaction to this startling information was one of surprise: “…in this turbulent time, I do not believe such a place and such people still exist.”

Hall’s observations were not accurate for the native inhabitants of the Great Loo Choo (European name for the Ryukyuan archipelago) did in fact possess weapons, albeit not arms of the same variety as those used by Europeans of the period. Rather, these were more often than not agricultural implements or ordinary tools employed in daily Okinawan life. Furthermore, the Ryukyuans had cultivated formidable combative skills.

Given its advantageous geographical position, the Ryukyu archipelago became a Southeast Asian trading hub. Trading houses flourished and many Uchinanchu merchants and brokers prospered. Chinese emperors dispatched ships carrying Sapposhi, cultural and economic envoys. Beginning in the early 1400’s and for more than four hundred years, no less than twenty of these Sapposhi delegations visited the Great Loo Choo. From the seventeenth to nineteenth century, Red Seal Ships, official Japanese trading vessels, made frequent stops in the harbours of Okinawa and other Ryukyuan islands. Additional international trade was conducted between the archipelago and Annan (Vietnam), Siam and Ligoor (Thailand), India, the Khmer Kingdom (Cambodia), Malaysia and Korea.

These commercial ventures also provided fertile ground for cultural exchange including knowledge transfer with respect to the use of arms. It is my contention that many weapons classified as authentically Okinawan originated in other countries. The sai (techek) was found in the arsenals of China and the Philippines long before its first recorded use in the Ryukyus during the mid-1800’s. A tonfa-like weapon was employed by Siamese foot soldiers at Ayutthaya in the 16th century well in advance of the first written record of its appearance in Okinawa during the latter part of the 19th century. The tinbei’s debut in Okinawa appears to have been predated – hundreds of years – by the use of similar shields among Indian and Arabic warriors. Its companion, the rochin, bears a striking resemblance to a tool used by elephant-mounted soldiers in India during the 16th century. It was employed both to control the animal and for close-quarter combat. In the early 20th century, tekko (knuckle-dusters) were popular among Japanese thugs brought to the Philippines by mainland employers eager to settle disputes between themselves, migrant Okinawan labourers and Filipino workers.

Conversely, the bo deserves distinction as the only weapon whose use predates any recorded foreign visit and religious rituals aside, was primarily defensive rather than domestic. Additionally, while historical texts document the use of a fighting staff by warriors in many countries, it is in the Ryukyus that this weapon played a vital role in civil defence among an unarmed population.

Today, modern weaponry is practiced throughout the world and Okinawan Kobudo is enjoying new popularity.

One of the most commonly used implements is the bo. This weapon has earned the place of high esteem it now holds; however, a seemingly obvious question is why would martial artists devote considerable time and effort to what would appear to be an archaic and perhaps, unpractical form of self defence? It is not likely that you would carry a staff when performing daily errands or when travelling to your office. Wouldn’t it seem inappropriate to meet your friends at the movie theatre or pub armed with a six-foot piece of wood?

There are genuine benefits to be gained through diligent bo practice, as well as the use of other weapons.

1. Improved body awareness coupled with heightened spatial perception, or how one moves in relation to and independent of others.
2. Increased strength and power, especially with respect to the upper body (i.e. hands, wrists, arms, shoulders, back, and chest).
3. Greater understanding of armed and unarmed personal defence.
4. Deeper appreciation for martial history, culture and tradition.
5. Development of busai – martial intuition.

All of the above may be cultivated as result of controlling an implement that extends beyond the practitioner’s arm’s length – for example, the bo – as well as other, shorter weapons.

At present, the study of Kobudo is conducted primarily through the practice and analysis of kata. Over the course of time, a variety of forms have been created by numerous weapons instructors. Some of the great bo masters include:

Sakugawa Kanga or Sakugawa of the Chinese school (1792-1843) – students in nearly every Okinawan dojo practice a variation of his kata.
Higa Matsu Pechin (1797-1870) – was a member of the palace corps and personal bodyguard to the Sho royal family.
Chinen Chikudun Pechin Umikana (1796 -1881) – a naval officer who visited Fuchou several times to conduct government business and study martial arts. He was an expert with both the bo and spear.
Chinen Chikudun Pechin Shikiyanaka (1825-1897) – arguably, the greatest bo student of Sakugawa Kanga, he created the popular form Chinen Shichiyanaka no Bo. He is also credited with developing the eku (oar) kata of the same name.
Chinen Chikudun Pechin Masanara (1842-1925) – after studying numerous ancient weapons forms, he created the kata that bears his name.
Kunioshi Shinkichi Pechin (1846-1932) – a bo expert, also adept at Ti and Chinese boxing.
Yabiku Moden (1882-1945) – established Ryukyu Kobudo, a system culled from a variety of sources.
Matayoshi Shinko (1888-1947) – this Okinawan weapons legend spent several years rounding out his martial education in central and northern China before creating what is now known as Okinawan Kobudo.
Taira Shinken (1897-1970) – a prolific instructor who taught Kobudo on the mainland, he is well- known and respected throughout the world. Many of his students have published books and articles about his teaching methods.
Chinen Masami (1898-1976) – a police officer by profession, this bo master founded Yamani-ryu, a style that emphasises speed, body shifting, and angular defences in weapons practice.
Matayoshi Shinpo (1920-1997) – was director and head instructor of Zen Okinawa Kobudo Ranmei played a central role in propagating Matayoshi kobudo worldwide.
Akamine Eisuke (1925-1999) – the late director and head instructor of Ryukyu Kobudo Hozon Shinkokai.
Minowa Katsuhiko (1929-2003) – founder the Ryukyu Kobudo Shinkokai, later absorbed into Ryukyu Kobudo Hozonkai. On his death in 2003 his most senior student, Kinjo Masakazu sensei, was tasked with preserving his legacy and teaching method.
Nakamoto Masahiro, a pupil of Master Taira Shinken, subsequently founded the “Okinawa association for the preservation of the traditional Kobudo” and the Bunbukan dojo. He is the most senior teacher present.

Most modern practitioners perform one or several bo kata listed below:

In addition to these forms, more than one hundred village bo routines exist. They are often performed by folkloric groups at Okinawan festivals which include the Tsunahiki (giant tug-of- war), dragon boat races, National Sport and Fitness Day, as well as many local celebrations. These exciting weapons exhibitions often include musical accompaniment in the form of cymbal clanging, Taiko drumming, and a unique Okinawan style of whistling.