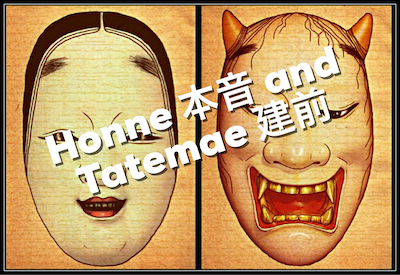 Most of us wear two faces: Tatemae 建前 (outward appearance) and Honne  本音 (true appearance/self). These aren’t mutually exclusive – often the lines blur – nor are they limited to Japanese society. Additionally, having two-faces shouldn’t be confused with being two-faced.  What passes for appropriate behaviour in one situation might be thoroughly inappropriate in another social setting.

In New Seeds of Contemplation, the theologian and progressive thinker Father Thomas Merton said, “We have the choice of two identities: the external mask which seems to be real, and the hidden, inner person who seems to us to be nothing, but who can give himself eternally to the truth in whom he subsists.” Father Merton’s observation speaks resoundingly to the contrast between a person’s genuine feelings and desires and public behaviour, as illustrated in the following scenario.

When a guest instructor says, “If any of you wants to come to my island, I will show you the real Okinawa,” a participant responds by asking if he knows another, more famous teacher.The guest replies, “He is my best friend, and if you come, I will take you to his home.” A few weeks later, when the participant contacts the guest teacher to advise he is traveling to Okinawa the following month, he is told “It’s a bad time for me. I’m too busy and can’t meet you. Next time for sure.” We’re left to wonder what has happened. The Okinawan guest teacher may have made this public offer to avoid disappointing the participant or to exaggerate his importance. He likely lacks the time, money and interest to host this would be guest.  Furthermore, the Okinawan instructor and more famous teacher probably move in different circles.

At the same event, the teacher approaches a participant and says, “You’re from Canada. I’ve never been to your country, but hear you have great fishing and a very young dynamic Prime Minister.” The participant’s answer is immediate. “Sensei if you come to Canada and visit my dojo, I will take you fishing for the largest salmon in the world and introduce you to Justin Trudeau.” In truth, the Canadian karateka has never been fishing, can’t tell the difference between salmon or cod, and has no political connections.

Why do we offer what we can’t possibly deliver, and expect things we’ll never receive? Why did both individuals exaggerate their resources and position? Tatemae.

An Okinawan sensei and close friend return from a teaching tour in India.

I inquire, “How was your trip?” He replies, “OK.  Some things were good. Others were bad. But I’ll go back next year.”  When asked why he’d return, my friend states, “I must build the branch.”  When I probe further, asking about their technical skills, he says, “Now not so good but maybe they’ll get better.”In an ever-expanding budo universe, size matters, and a worldwide presence can garner respect among colleagues closer to home. Consequently many Okinawan teachers aim for global footing by establishing mini-empires and far-flung branches. These are loose affiliations at best where members merely wear a patch and practice a system that bears little resemblance to their Okinawan “teacher’s” curriculum.  In reality, only a handful might have a few bona fide international students and representatives.

Understanding martial culture requires an awareness of Tatemae and accepting that the concept of “outward appearance” isn’t entirely artificial or disingenuous.

To reveal our authentic nature demands we drop the mask – that is, let go of the image you think others want to see. You’ll be vulnerable and risk losing “followers,” but you’ll gain more real friends, and share unadulterated affection rather than superficial adoration. When budoka stop worrying about how they’re perceived and bare their true face, they’ve transitioned from Tatemae to Honne