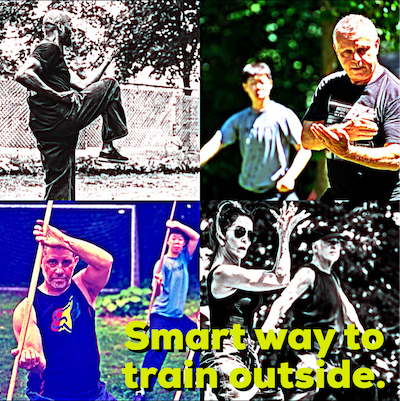 We are now learning and practicing martial arts outdoors. Fresh air is a wonderful detoxifier. As long as we take small cautions, outdoor training is healthy and fun.

Taken from Muscle and Fitness magazine.

A sunburn is damage to the skin caused by the sun’s ultraviolet (UV) rays. Most sunburns are mild, resulting in light redness of the skin and that goes away within a day or two. Other burns can be more severe causing swelling and blisters that take longer to heal.

Always wear sunscreen while training outdoors. Apply 30 minutes before training to allow it time to absorb into the skin. For long bouts of activity, be sure to reapply every 2 hours.

Dehydration occurs when your body’s fluid levels become depleted. This can happen pretty easily if you train hard outside in the summertime. The heat can prompt the body to work harder and produce more sweat than normal, which depletes water reserves. If you live in a dry climate, the effect can be even more dramatic.

If you lose too much fluid, your body can’t function normally, and dehydration can even be fatal. If you’re dehydrated you might feel weak, irritable, anxious or dizzy. You could faint—or worse.

Before going outside, be sure to drink plenty of water. And every 20 minutes, drink at least 8 ounces of water. Avoid caffeinated energy drinks because they’re a diuretic and will increase water loss. Water is best, but non-caffeinated sports drinks are a good option for long-duration exercise sessions, since they replace electrolytes such as sodium and potassium.

This one’s the most dangerous, and it comes when the body no longer has the ability to control its temperature after long exposure to high heat. Those with heat stroke have an internal body temperature of 105 degrees Fahrenheit or greater.

Heat stroke can cause brain damage, and it can mess up other internal organs, as well. Fainting may be the first sign of heat stroke, but there are other symptoms such as lack of sweating, rapid heartbeat, shallow breathing, disorientation or seizures.

Follow the same steps to avoiding heat exhaustion and dehydration. Be sure to drink plenty of fluids: 24 ounces of water 2 hours before exercising outdoors, 8 ounces right before training, and 8 ounces every 20 minutes of activity. Avoid the outdoors during heat waves or extremely high temperatures. Wear sunscreen and loose fitting clothes.