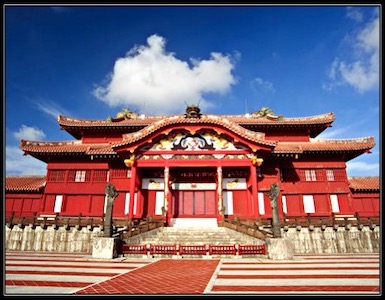 On October 30, 2019, a massive fire destroyed the main structures of Shuri Castle on Japan’s southern island of Okinawa.
Surrounded by stone walls, the complex is largely comprised of wood edifices, and the cause of the blaze is believed to have been an electrical problem that was likely accelerated by recently reapplied lacquer.
The 700-year-old Unesco World Heritage site, located on top of a hill overlooking Naha, the prefectural capital, is more than a popular tourist attraction visited by busloads of tourists and legions of karateka eager to take their annual souvenir photos. It is the cultural, historical and spiritual heart of Okinawa.
Like the mythical phoenix, Shurijo will rise again from the ashes, and rebuilding has already begun. Although it’s a daunting task that will require money, materials, construction crews and armies of artisans, Northern Karate Schools and other martial organizations are rallying support to reconstruct this treasure of the bygone era of the Ryukyu Kingdom. Giri (duty, obligation, responsibility and privilege) in action. 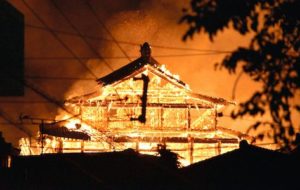 The following general information is provided by the Okinawan Tourism Board:
The castle was built in the 13th century by Shunbajunki, the second king of Chuzan, and it was to play a key part in many of the struggles in the centuries that followed.
Shurijo Castle is situated on a small hill, surrounded by curving castle walls that protect numerous structures and facilities within. On the premises are numerous open squares and many scared sites. These features are not limited to Shurijo Castle, but can also be seen at other castles in Okinawa, called Gusuku. The other Gusuku in Okinawa were defeated and ruined in their rivalry with Shurijo Castle, while Shurijo maintained the features of Gusuku and continued to flourish. 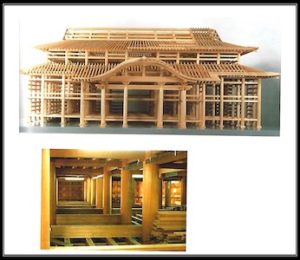 The Shurijo Castle grounds can be largely classified in inner and outer baileys or wards. The inner ward was completed in the early 15th century, and the outer ward was completed in mid-16th century. The Seiden and other buildings within the castle are built along the east-west axis, with its front facing west. These west-facing structures are distinctive of Shurijo Castle. Due to the long historical exchange with China and Japan, there are many features throughout Shurijo Castle showing the architectural cultures of both China and Japan, and the Seiden and Hokuden are notable in this aspect.
Shurijo Castle was the royal residence for the king and his family, and at the same time, it functioned as the Shuri Royal Government, a governing institution of the kingdom. It also was the core of religious networks that operated the rituals and ceremonies of the kingdom, executed by the priestesses dispatched at various locations throughout the land. In addition, performance arts and music flourished at Shurijo Castle and its surrounding areas, with many experts in the arts and crafts fields displaying and honing their skills. Shurijo Castle played was also the center of cultural arts in the kingdom.
In the spring of 1879, the king was banished from Shurijo Castle and Ryukyu Kingdom was annexed, and became Okinawa Prefecture. Later, Shurijo Castle was turned into a Japanese military post, and various schools and other facilities were housed here. During the 1930s, there were large-scale repair works, but the castle was completely destroyed in the attack by the American forces in 1945. After the war, the site became a campus for the University of the Ryukyus, but after the relocation of the university, restorations advanced and continues today. The restored Shurijo Castle is modeled after the castle from the 18th century and later. Shurijo Castle Site was registered as a World Heritage in December 2000.