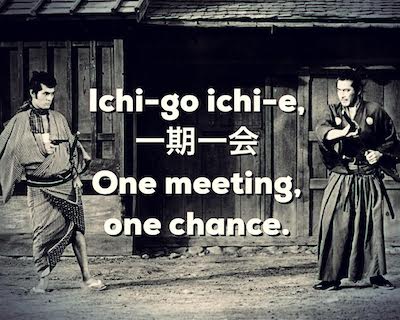 Luck is what happens when preparation meets opportunity.

In the classic 1961 movie Yojimbo (用心棒), the man with no name confronts a gun-wielding adversary. From a considerable distance, the sword master has to face not just a superior weapon, but a likely death. In a matter of a millisecond, all is lost or gained. This is ichi–go ichi-e, 一期一会. One meeting.One chance.

Although our lives may not be as dangerous or dramatic as the stuff we see on the big screen, we all face moments that make or break us. Another understanding of Ichi-go, ichi-e can be understood as now or never.

While Yagyu Munenori was the founder of the Edo branch of the famous Yagyu Shinkage-ryu School and held the prestigious post of personal sword teacher to Shogun Tokugawa, he felt something was lacking in his practice. He was confident of his physical and technical abilities, yet remained conflicted emotionally and asked himself “Can I really prevail in shinkenshobu, a life or death match?”

Yagyu contacted the Zen sage of the day, Takuan Soho (1573- 1645), and inquired about self-doubt, the secret of kenjutsu(sword art), how he could might every combative exchange.

Takuan’s simple answer:  “Raise your sword higher and strike faster. Worry about form or consequences later. Overthinking orwaiting for a better situation will only cause failure. Win, lose, live, die, matter not. Focus on the minuscule interval, and in the perfect moment, even the tiger finds no room to insert its fierce claws.”

We all have hopes, aspirations, and dreams. Maybe it’s a trip you want to take or famous person (martial arts or otherwise) you’d like to meet. Perhaps it’s a book dream of writing, a skill you aim to learn, or a relationship you wish to develop or heal. If you’re waiting for the right time, opportunity might elude you.

If you have an opportunity, an invitation, a chance to do something, anything, embrace the Nike tagline and “Just do it.”

The saddest phrase in the English language could be “what might have been.”  Without an occasional leap of faith, we may amass an ever-growing list of regrets and fail to recognize ichi-go ichi-e.