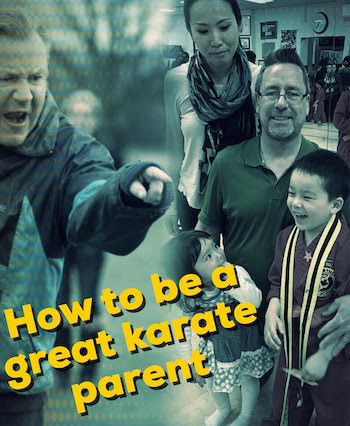 My journey as a martial arts educator began serendipitously when I was a skinny teenager, and a sensei at the YMCA asked if I could lead warm-ups and perform basics in weekly classes. After a few short months, she retired, and I inherited the program. The rest, as they say, is history.

Over the past fifty years, I’ve encountered several, or in some cases, a combination of parenting styles:
Authoritative – parents who coerce their children into class.
Permissive – fathers and mothers who ask toddlers, “What do you think buddy? Should we sign this contract?”
Disengaged – more engrossed with their PDAs than their child’s martial progress.
Helicopter –micromanage every class, shout or signal instructions from the sidelines, and demand stripes, belts and awards.

More recently, I’ve witnessed the onslaught of snowplows, bulldozers, and lawnmowers. These individuals are dedicated to clearing obstacles from their offspring’s path rather than confronting and conquering them, breeding “successes” that are orchestrated, not earned.

I do not doubt that all of the above love their children and are struggling to do the hardest job in the world, particularly when the rules of engagement are about as stable as quicksand.

While not a dad in the biological sense, I’ve taught tens of thousands of students, met countless parents and nurtured many generations of kids. I agree with experts who state that the real aim of parenthood is to raise happy, healthy, self-sufficient adults. With more than a half-century of experience under my frayed black belt, I’ve had a front row seat to the complex dynamic between parents, students, and dojo. Because I’ve learned something about how to bring out the best in each student, and perhaps, their mom and dad, I’ve outlined five steps to become a great karate parent:

1- Be certain your kids are ready for martial arts. A great karate parent realizes that all too frequently, kids forced into sports before they’re ready can become disappointed, frustrated and resentful. When a child expresses an interest in an activity, parents should begin researching programs, and quality of instruction takes precedence over accessibility and convenience. (Note: once you’ve decided your child is ready for martial arts, make sure the reverse is true. “We teach kids” doesn’t necessarily translate as “our instructors have decades of experience teaching children.” )

2- Don’t use the dojo as a babysitter. A great karate parent knows that their role extends beyond signing an agreement and dropping off/picking up their child at the dojo door. He/she has the privilege and responsibility of overseeing their child’s karate participation and encouraging dialogue with trusted instructors.

3- Emphasize enjoyment over winning or receiving belts. A great karate parent understands that a primary motivator for participation is the pleasure of learning. Studies show that the main reason youngsters drop-out of any activity is because it’s no longer fun. Children want to have a good time, and other benefits like self-discipline, commitment and respect will come later. This shouldn’t suggest there won’t be speed bumps along the way and encouragement can help keep youngsters on track and moving forward.

4- Focus on skills development. A great karate parent recognizes that physical growth and maturity occur at different rates in young karateka and are adept at communicating this to their child. The average 3-year-old will learn at a different pace than an 8-year-old. This condition isn’t permanent, and it shouldn’t negatively impact a boy or girl’s self-esteem. One more thing: a great karate parent remembers their role is mom/dad, not sensei and doesn’t criticize, complain or compare.

5- Commit and receive. A great karate parent values commitment and regards their child’s training as a three-partner alliance: student-parent-sensei. Over time, a martial education will yield physical, social, mental and emotional gains that far outweigh an afternoon of screen time, swinging lightsabers, jumping on trampolines, or climbing walls.

Bottom line: Once you’ve done the research and enrolled your child in a martial arts course, trust the people and lean into the process. Be an ally, not an adversary. Engage and encourage without interfering. Cooperate rather than command, and celebrate genuine achievement. Above all else, avoid living vicariously through your son or daughter (you can always get off the bench and join them in the dojo), because a great karate parent is, quite simply, a great parent.