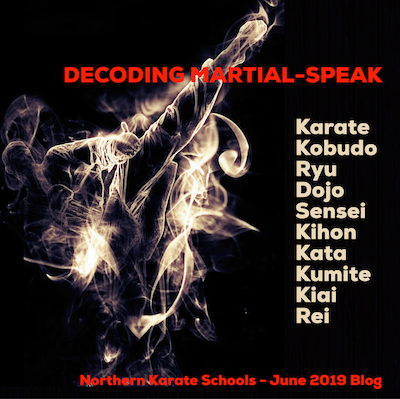 To decode martial-speak, we need to delve beneath the surface of simple translation and widely accepted definitions, and discover a deeper sense of popular terms.

KARATE空手
On the surface:  empty hand. The modern name karate is composed of two characters.  空, ku or sora, signifies “sky” or “void” and 手, shu or te, means “hand.” It first appeared in the mid-1920s during the late Taishō era and signaled the detachment of karate from its provincial Okinawan roots as it migrated to the Japanese mainland.
Beneath the surface: Before this change, karate had been written as 唐手, or “China hand,” paying homage to longstanding cultural, commercial and martial exchanges between the Ryukyus (Okinawa), and the Middle Kingdom (China).  In fact, the kanji reads “Tang hand” a nod to the golden age of military and martial development and refinement that flourished from the 7th to the 10th century AD.

RYU 流
On the surface: style or system, e.g., Goju-ryu (style of hard and soft methods), or Wado-ryu (style of peace-seeking methods).
Beneath the surface: literally translated, 流 is “flow” or “current,” a reference to a founder’s teachings “flowing” through generations of students.

DOJO 道場
On the surface:  place of the way. As noted in our September 2018 blog, early budoka didn’t train in a building or dedicated space, at least not by today’s standards.  They practiced outdoors.  Gradually, formalized dojo appeared, and any Japanese discipline with the suffix do (from the Chinese tao or dao, is defined as “way” or “path”) would be studied in these schools that were often situated near temples.
Beneath the surface: In the words and wisdom of Nagamine Shoshin:  The dojo is a place where courage is fostered, and superior human nature is bred through the ecstasy of sweating in hard work. It is a sacred place where the human spirit is polished.

SENSEI  先生
On the surface:  teacher.
Beneath the surface: the Chinese script is read as “life lived before,” suggesting that a sensei is both a master of an art or system and an individual who brings life experience to the dojo as a mentor and guide.  A true sensei serves technical material in a manner that both feeds and fuels a student’s hunger for knowledge.

KIHON 基本
On the surface:  basic, foundational techniques.
Beneath the surface: the unique and defining intricacies of a particular style.  For example, a gyaku-zuki (reverse punch) is positioned at the hip among Shotokan practitioners and closer to the arm-pit for Goju-ryu students.

KATA型 or 形
On the surface:   form, shape.
Beneath the surface: physically, kata are a series of choreographed defensive and offensive movements performed solo or with a group.  They are also routines that can program positive behavioural patterns for a karateka, both inside and outside the dojo.

KUMITE 組手
On the surface:  sparring.
Beneath the surface: originally called te-gumi (transposition of kanji for kumi te), these defensive and offensive partner drills emphasized combative skill rather than sport. Gumi means “grapple,” as well as constructing a fighting system that incorporates elbows, knees, lock, and throws.

KIAI気合
On the surface:  yell of spirit.
Beneath the surface:  kiai is comprised of two characters representing “energy” and “harmony”, as in the union of spirit and mind. Similar shouts or cries are often heard as athletes and armies tap into their inner reserves.

REI 礼
On the surface: bow, courtesy.
Beneath the surface: an all-important gesture that demonstrates gratitude and humility.   It is a demonstration of respect that transcends merely bending and lowering one’s head. In the words of famed Okinawan teacher Morio Higaonna, When you bow, don’t just bow with your body, but bow with your mind.

Bottom line:  interpretations for common karate terms can be both simple and complex. Decoding martial speak requires guidance, research, and a heightened understanding of your practice and yourself.