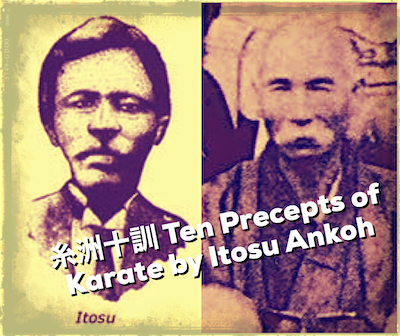 Beyond aesthetic or sentimental value, makimono (brushed scrolls) feature timeless guidance for personal and martial growth. Other martial advice, transmitted in the form of letters and doju-kun, appeared at the turn of 20th century.

In his book Karatedo Taikan (published in Showa 13, 1938), Nakasone Genwa includes Itosu Ankoh’s 1908 precepts, (originally written in a form of a letter to the Monbu-sho, Ministry of Education).

It should be noted that at time, the (Japanese) mainland’s interest in karate coincided with the rise of 国家主義 Kokka-shugi, a right-wing, pro-military political movement:

Karate does not derive from Buddhism or Confucianism. In olden times two styles, called Shorin style* and Shorei style*, came from China. We consider that both have distinct advantages and should not be altered or combined – they should be left as they are. I leave the following precepts:

1- The true aim of karate is not only to train the body. If you train at karate eventually you will gain the spirit to be able to sacrifice yourself for your ruler or nation. Never fight over insignificant matters; do not fight ruffians or villains. Avoid such people as often as possible.

2- Training in karate will make your muscles powerful and your body strong. As a result you will develop a courageous spirit. If you train at karate from childhood you will find that you are able to make a great contribution to society, even as a soldier. Remember the words attributed to the Duke of Wellington after he defeated Napoleon: “The Battle of Waterloo was won on the playing fields of Eton.”

3- You cannot master karate easily, or in a short time. The process is like a herd of cows grazing across a field. No matter how slow the herd moves it will eventually reach the end. Even if it moves slowly it could cover 100 miles. If you train one or two hours every day, your body will change after 3 or 4 years – you will get to the core of karate.

4- The important skill in karate is “Ken-soku” (fist-foot), so use the makiwara to develop these weapons. Keep your shoulders down, expand your chest and develop your power. Root your stance to the ground. What you have to do is perform 100 to 200 punches every day.

5- A light, upright stance of karate is best. You must keep your back straight and your shoulders down while keeping your legs strong and then focus your attention on the tanden.

7- Karate techniques are vast. When you train you must try to understand the aim of the movement and its application. You have to take into account all possible meanings and applications of the move. Each move can have many applications and uses.

8- When you train in karate you must study in advance whether the application of each move is more useful for training or defence.

When you train in karate you should train as though you were in the battlefield fighting the enemy. You should keep your shoulders down and fix yourself in the stance. When you block or thrust you should picture the enemy. In so doing you will gradually master how to fight in a real battle.

9- Train according to your body type, and personal strengths and weaknesses.  If your training is too great for your condition, it is not good for you. Your face will turn red, as will your eyes, and you will damage yourself.

10- Individuals who train in karate usually enjoy a long life. This is because the training strengthens muscles, improves the digestive organs, and strengthens the blood circulation system. I think that from now on karate should be introduced to the curriculum of the Shogakko (elementary level school) and in doing so we could produce men capable of defeating ten enemies single-handed.

If you introduce and keep these precepts at the at schools of all prefectures, then in 10 years karate will have prevailed, not only in Okinawa, but all Japan. Karate would also be able to contribute to military society.

*In my opinion best way to categorize Chinese Shorin style, is being a liner, hard or external school based on the teaching of Shaolin, and Shorei being based on the softer, circular, internal teachings of Wudang. Over time these two methods took on uniquely Okinawan definition and experienced cross-pollination.